After a lengthy hiatus from blogging (I’ve actually been spending my days writing a new novel) I have a post up today at the SFNovelists Blog Site, which I help maintain along with approximately 100 other writers of fantasy and science fiction. Today’s post is called “Short Fiction, Anthologies, and an Ongoing Kickstarter Campaign,” and it is about exactly that. (This is what we call truth-in-advertising, folks!) Writing short fiction is a terrific way for aspiring writers to hone their craft, and this post discusses the benefits of writing stories, as well as the fun of crafting them for themed anthologies. And finally, it offers a few details about a new project -- Temporally Out of Order -- that a group of us are trying to get off the ground.  Please check out the post here.  And learn more about the Temporally Out of Order kickstarter campaign here.  Thanks, and enjoy!!

Today on the Summer 2014 Plunder of Souls Blog Tour, I conclude my month as Featured Author at Drey's Library.  My final post for Drey is a somewhat lighthearted list of my writerly pet peeves -- from mall signings to "reserves against returns," and a few things in between.  While you're at the site, be sure to sign up for a chance to win a free signed hardcover copy of A PLUNDER OF SOULS, the third Thieftaker novel, which has just been released. You can find the post here; I hope you enjoy it.

After a few days off, the Summer 2014 Plunder of Souls Blog Tour resumes with a post at my "home" blog, Magical Words. Today's essay is called "The Writing Life: Living With Success and Failure," and it is about the ways in which writers define their triumphs and setbacks.  Too often, outside influences force those judgements upon us. The truth is, in a profession as difficult as this one, success has to be, at some level, self-defined.

"Writing fiction — short form or novel length — is no small thing, and upon completion of a story or a book we should be able to pause and take pride in the accomplishment.  Indeed, we have to be able to do that, because it is the one reward that cannot be taken from us or spoiled by ... external factors." 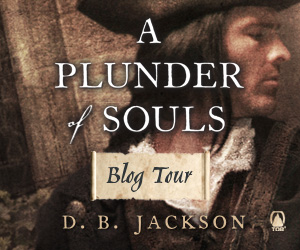 I was on the road yesterday, driving home from North Carolina after a fun and successful signing tour that began with a book launch party at ConGregate in Winston-Salem, and then took me to Rock Hill, SC, Gastonia, NC, Richmond, VA, and Raleigh, NC. Along the way I reconnected with old friends, and met some new ones. It was a great trip.

But I did miss out on telling you all about yesterday's stops on the Summer 2014 Plunder of Souls Blog Tour. So let me tell you about those, as well as about today's stops.  Yesterday I was the blog of my good friend Stephen Leigh, with a post about minor characters who assert themselves and become major characters. The post can be found here.

I was also at Magical Words again, with a post about some of the odd things people sometimes say to writers.  You can read that post here.

Today, I am once again at Drey's Library with a post about the books on my enormous and growing "To Be Read" pile that I am most excited to delve into.  That post can be found here.

And finally, but definitely not least, I also have a post up at SFNovelists that touches on the best part of my recent signing tour:  the fact that I was accompanied, at least for some of it, by my fifteen year-old daughter.  That post is called "Notes from the Road: The Shared Journey," and you can find it here.

I hope you enjoy them all.

Happy Monday, everyone! Today, the Summer 2014 Plunder of Souls Blog Tour visits the journal of fellow author and history geek Beth Bernobich. Beth's newest novel, The Time Roads, will be out later this year -- it's a great book and I recommend it. For today's post, Beth asked that I take some time to write about the women in the  Thieftaker Chronicles, and so I have written about Kannice Lester, Janna Windcatcher, and, of course, Sephira Pryce.  I hope you enjoy the post.

And later this week, I will be hosting a live book launch event at Bitten By Books, the paranormal site that recently gave A Plunder of Souls, the third Thieftaker novel, a five-star review.  At the launch event, I will be giving away a $50 Amazon gift card to some lucky fan, so start accumulating your chances to win by RSVPing for the event here.  Good luck!

Another day on the Summer 2014 Plunder of Souls Blog Tour, another couple of posts. Today, I'm visiting another writer friend, Alyx Dellamonica, with a post about the things I read as a child.  It was a fun post to write -- a chance to reminisce. You can find the post here. I hope you enjoy it.

I'm also back at Drey's Library, where I am the featured author for July.  Today's post is about building the relationship between Ethan Kaille, the conjuring, thieftaking hero of my Thieftaker books, and Sephira Pryce, his beautiful and deadly rival and nemesis.  That post can be found here. And while you're at Drey's Library be sure to enter the contest to win a free signed copy of the newest Thieftaker novel, A Plunder of Souls!

Today on the Summer 2014 Plunder of Souls Blog Tour, I'm back at Magical Words -- my "home" blog -- with a post on plotting. Sometimes the hardest thing about writing in a series, particularly in one that consists of stand-alone novels, is keeping stories fresh as well as entertaining.  My post at Magical Words is about five things I do to keep my narratives new and interesting.  You can find the post here.

I am also visiting with my friend Brandy Schillace with a post about research and "Striking Research Gold."  I've had some great discoveries as I have pieced together the history for my Thieftaker novels, and that was particularly true as I worked on A Plunder of Souls. You can find the research post here.

Finally, I would like to mention to all of you who live in the area around Charlotte, North Carolina that Faith Hunter, A.J. Hartley, and I will be signing books tonight at the Books-A-Million in Gastonia, from 6:30-8:30.  Come on out and say hello! (A listing of all my appearances can be found here.)

We have a variety of fun stuff on the Summer 2014 Plunder of Souls Blog Tour today, starting with free flash fiction set in the Thieftaker world on the blog of my wonderful friend Faith Hunter.  That's right FREE fiction, never available before.  You can find that here.

I also have a new interview and book giveaway up on PNRradio.com in partnership with ILoveVampireNovels.com. Arial Burnz conducted interviews with me and author Tricia Skinner. My interview was far-ranging and a great deal of fun; I'm sure Tricia's was too.  And if you listen to the interviews you'll also learn how you can win a free copy of my book or Tricia's.  So give it a listen.  You can find the interview here. You can also find the interview as a podcast here.

Finally, I have a post up at Fantastical Imaginations about writing in different fantasy genres. That post can be found here.

Sometimes, when we rush, we do stupid things.  To that end, I somehow forgot to mention in this morning's post (below) that I am today's guest at John Scalzi's "The Big Idea" blog.  I'm writing about magic systems and how they do and sometimes don't work. Here is the link:

Today I'm visiting with my friend C.E. Murphy, who was kind enough to interview me for the Summer 2014 Plunder of Souls Blog Tour. And I want to draw your attention to a wonderful new review of A Plunder Of Souls from Bitten by Books!! Check it out: http://bittenbybooks.com/a-plunder-of-souls-by-d-b-jackson/

The interview with Catie Murphy can be found here:

And don't forget that there are A Plunder Of Souls giveaways going at the following sites:

I'll be at ConGregate this weekend with the official A Plunder of Souls Launch Party, and then I begin my summer 2014 signing tour. Stay tuned!!
Collapse